Morocco is a country of temptation, an oriental beauty, skillfully flirting with a mesmerized guest. Located in North Africa, it is full of paradoxes. Beautiful and amazing attracts from all parts of the world: in the west – the riot of the Atlantic, in the north – the gentle waters of the Mediterranean Sea, in the south – the cosmic reliefs of the Sahara. And in the heart there are picturesque cities where the hot temperament of the Black Continent, millennial oriental traditions and modern technologies of the West are mixed.

An old mosque is probably hidden behind the facade of a luxurious hotel, behind a shopping center familiar to European gaze – a bustling market that drives crazy with aromas of spices, behind a fashionable spa with an exclusive thalasso menu – a secluded beach with idyllic landscapes. The traveler can only look around more attentively and be ready for endless discoveries.

The sights of Morocco are monumental and mysterious, a walk through them is a touch to the mysteries of millennial oriental culture. Most planes land in Casablanca, so it would be more logical to start the tour from the “city of white houses”. It is easy to get lost in the narrow alleys of Medina, and in the Habus quarter, you can completely forget that it was built not in the Middle Ages, but in the 1930s, and not by the Arabs, but by the French.

The most beautiful buildings in Casablanca are the fabulous Mahkama du Pasha palace and the ornate Hassan II mosque with a 210-meter minaret.

In Rabat, the Moorish fortress Kasbah Udaya, the ruins of the Yakub al-Mansur mosque, the unfinished Hassan tower with pointed arches and the white-stone mausoleum of Mohammed V remind of the glorious past.

The heart of noisy Marrakech is the Djemaa el-Fna square with fakirs, acrobats, snake tamers, working miracles for the amusement of tourists exactly where in the 10th century the heads of the convicts were cut off. The symbols of the city are the Koutoubia mosque, the Bahia palace, built for the beloved wife of the vizier, and the medieval El Badi palace, plundered, but retaining its former dignity.

Agadir is a resort town, but the beach is far from its only attraction. On a high hill is the Kasbah, a powerful fortification built in the 16th century. The Berber Museum contains artifacts of the ancient people: jewelry, carpets, talismans. The Bird Park is inhabited not only by birds, but also by animals: monkeys, wolves, deer, gazelles. And the colorful El Ahad market is the largest in the region and the third largest market in all of North Africa.

There are places worthy of visiting not only in cities, but also outside them. The Sahara Desert in the southeast of the country is a true natural legend, an endless series of breathtaking landscapes. The most beautiful place is in the medieval settlement of Ait Ben Haddou, nestled on the slope of the Atlas Mountains. Hollywood directors do not in vain choose it as a scenery for cult films: the majestic red walls in the middle of the oasis seem to have frozen out of time and space.

Due to the large differences in relief and the proximity of the capricious Atlantic, the climate in Morocco varies significantly throughout the country. On the Mediterranean coast, it is mild, subtropical, with hot summers and moderately cold winters. The temperature in summer reaches +29 … + 35 ° C, and in winter +15 … + 20 ° C, in the mountains -15 ° C. Summer heat is well tolerated thanks to the cool ocean breeze. The average water temperature is +18 … + 21 ° C. In the mountains, even on the hottest days, the temperature does not rise above + 15 ° C; in winter, some peaks are covered with snow. There is snow at an altitude of 2000 m for more than 5 months a year. 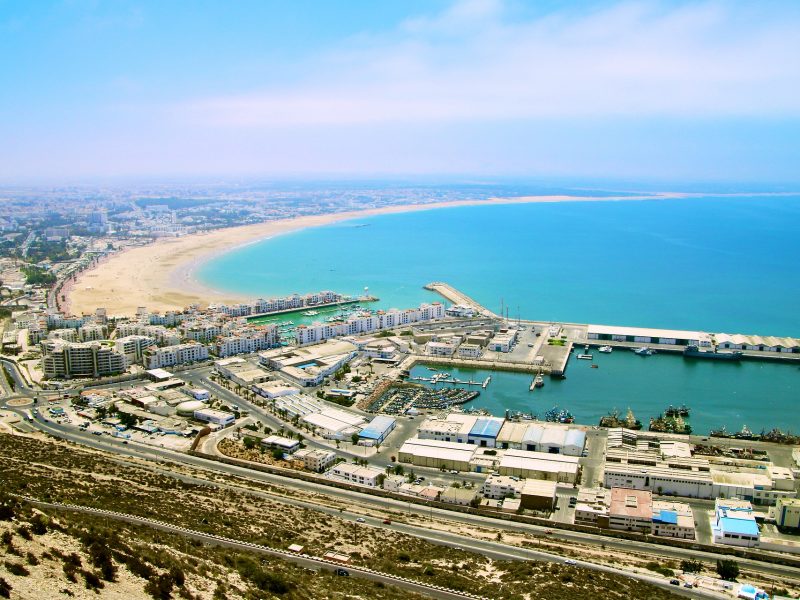 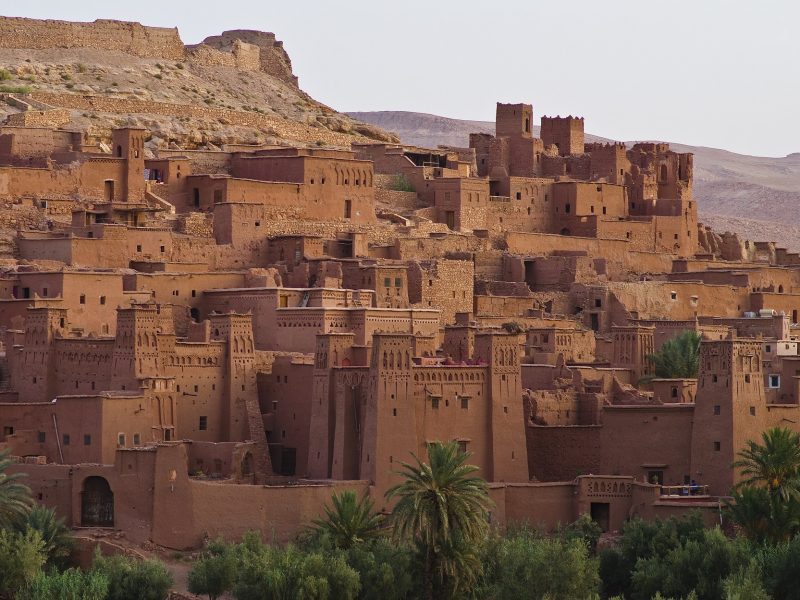 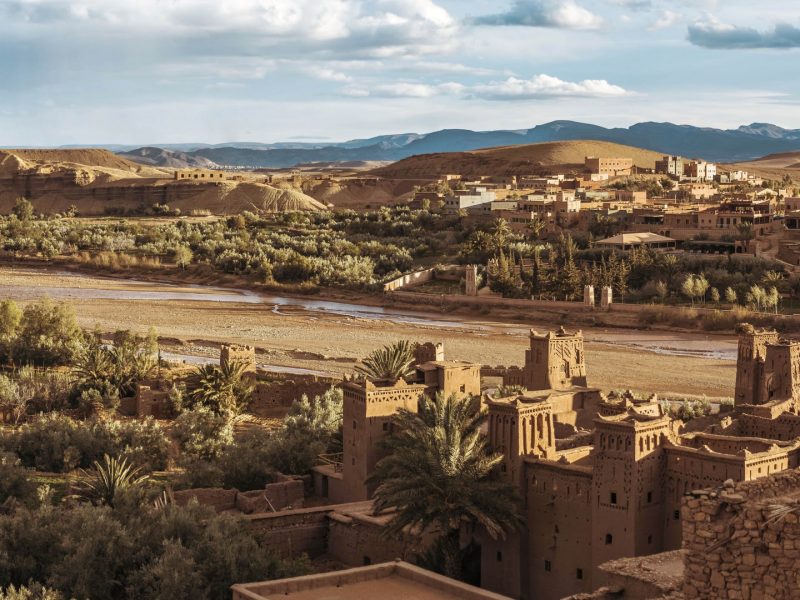 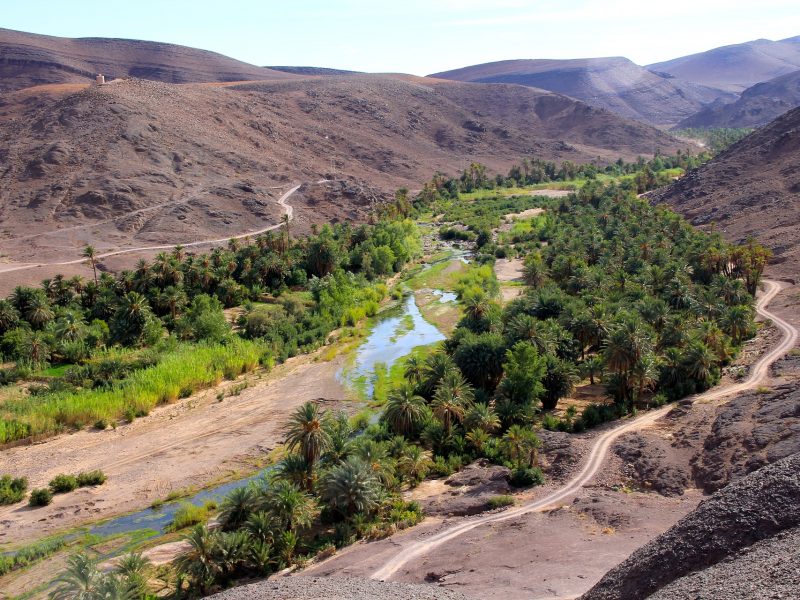 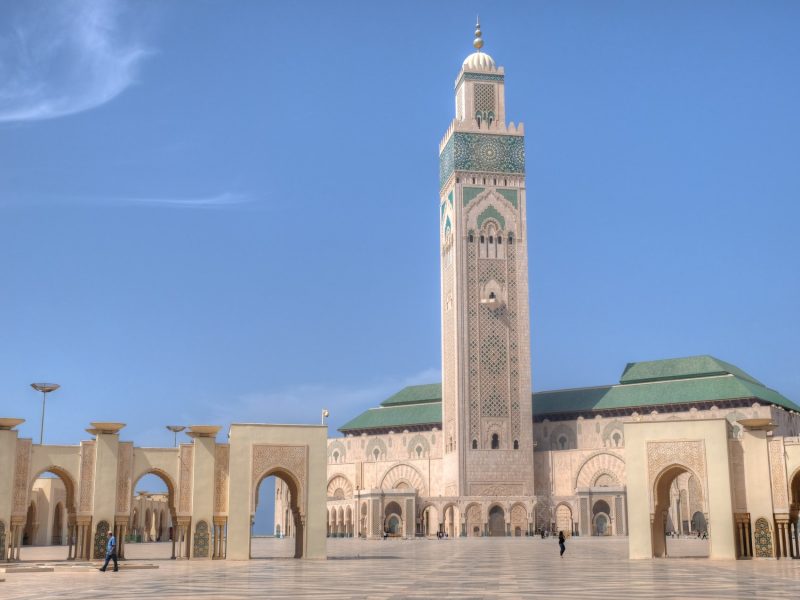 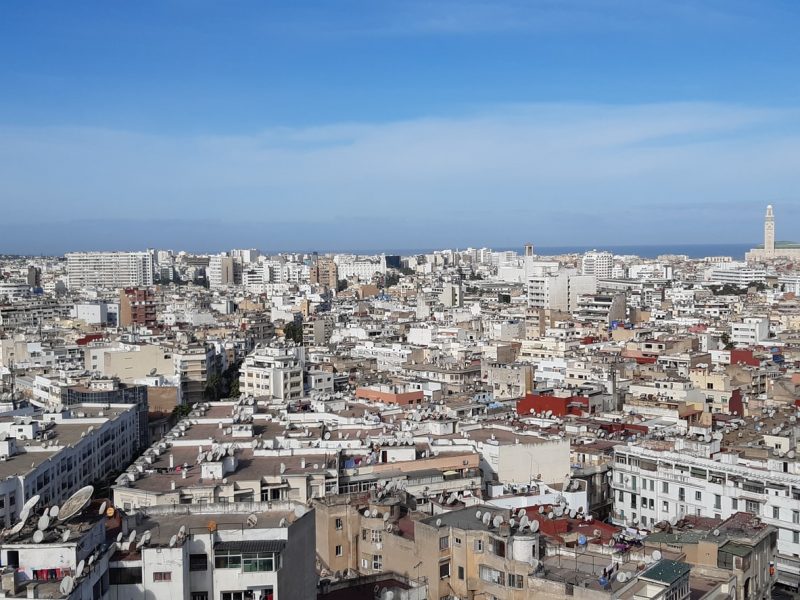 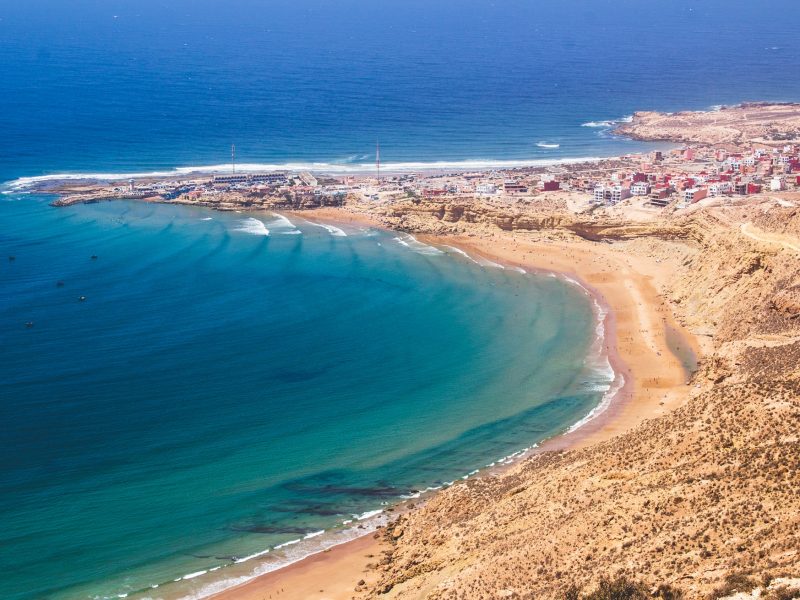 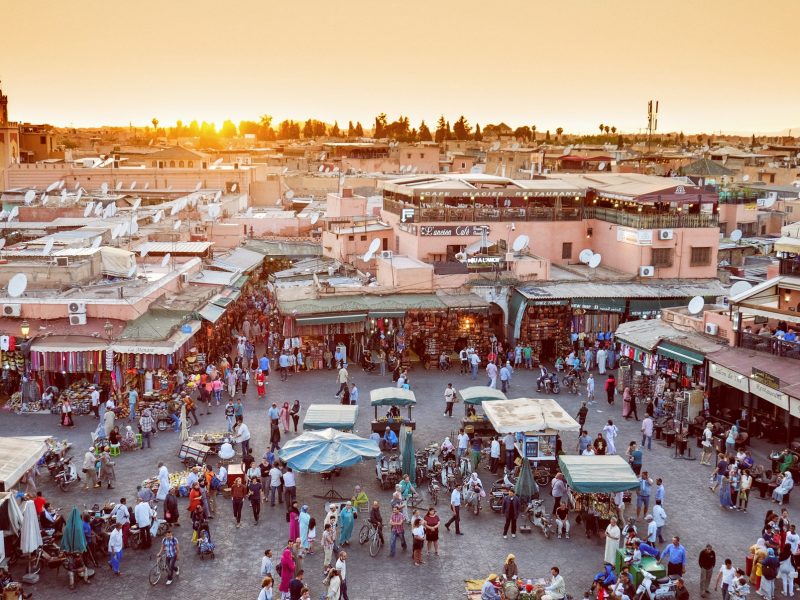 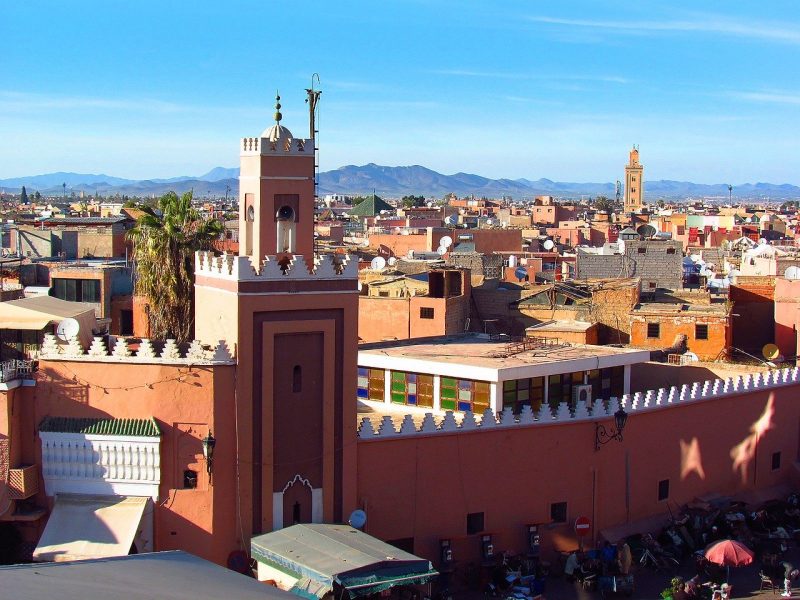 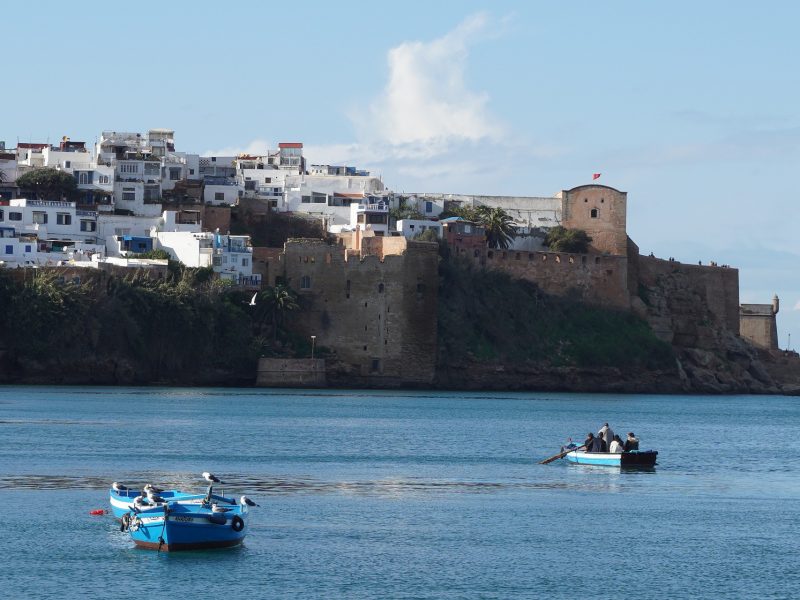 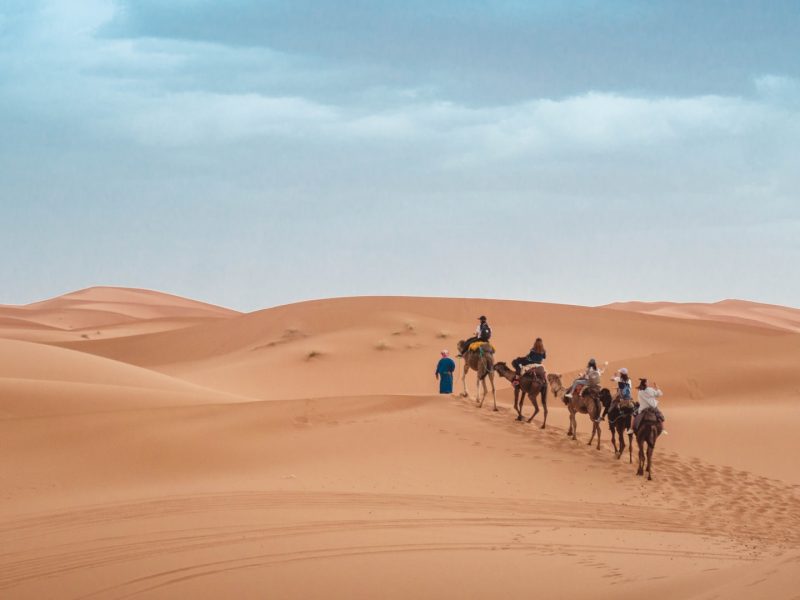